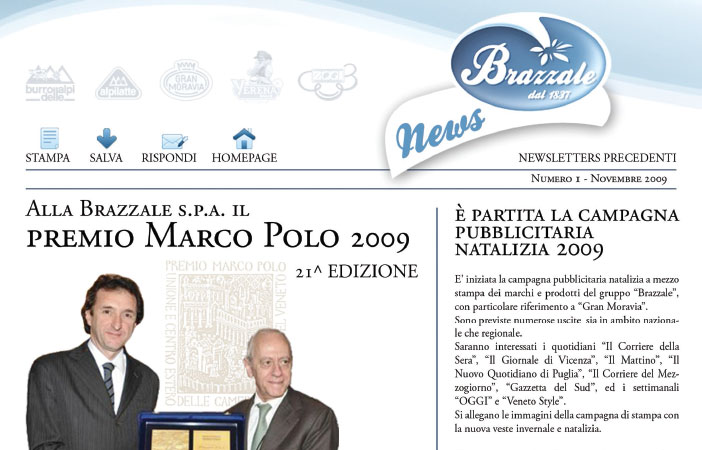 Established by Unioncamere Veneto and by the Foreign Office of Regional Chambers of Commerce, this is the nineteenth edition of the accolade which is awarded annually to the Veneto enterprises that contribute most to the development of international trade in the Region in the industrial, crafts, agri-food, tourism and services sectors. The award aims to honour those enterprises that, with their daily commitment, have contributed to making the Veneto’s exports the heart of the regional economy, amounting to 51.2 billion euros in 2008, an outstanding 13.2% of total national exports.
The award was presented to the director Roberto Brazzale by the President of Unioncamere del Veneto, Vittorio Mincato, last November 13 in Treviso.
The award sheet quotes the reasons as follows: “The group, which employs around 350 employees, is characterised by a distinct international vocation, with agro-industrial plants in Central Europe and South America and a sales network of both packed products and cheese forms. In 2008 its turnover exceeded 100 million euros, 26% of which abroad, mainly in Europe, Asia and America.”
On this occasion, the owners expressed a “heartfelt thank you to all the company employees, whose earnestness and commitment have made it possible to achieve the positive results in the difficult challenges that the market poses day after day.”

THE CHRISTMAS 2009 CAMPAIGN HAS BEEN LAUNCHED
The Christmas press advertising campaign for the brands and products of the Brazzale Group has been launched with a particular focus on “Gran Moravia.”
There will be many advert slots at both national and regional levels.
Adverts will appear in daily newspapers such as “Corriere della Sera”, “Il Giornale di Vicenza”, “Il Mattino”, “Il Nuovo Quotidiano di Puglia”, “IL Corriere del Mezzogiorno”, “Gazzetta del Sud”, and the weekly magazines “OGGI” and “Veneto Style.”
Pictures of the press campaign with the new winter and Christmas look are attached.