The award ceremony took place on Sunday, October 6 at 7 pm, at the Tanzbrunnen Rheinterassen in Cologne, during the Italian Evening organised by Koelnmesse Italia in cooperation with Federalimentare and the ICE entirely dedicated to our country and its culinary tradition. The prizes awarded by a qualified panel of judges went to the companies which best represent Italianness, in Italy and in the world,” as stated in the explanatory notes.

The person receiving the prestigious award was the lawyer Roberto Brazzale, CEO of the Group, who commented: “It’s a reward to the creativity of our employees who use their intelligence day and night to the benefit of consumers and their needs. The centre of all our efforts is, in fact, the consumer. And the freedom to innovate an own brand traditional cheese such as Gran Moravia, allows you to achieve maximum results in this sense.”

Once again this year, the Brazzale Group is present at Anuga 2013, the exhibition dedicated to food held in Cologne from October 5 to 9, with a stand dedicated to its flagship product, Gran Moravia, in addition to Burro delle Alpi, Verena cheese and the whole range of Zogi stretched-curd cheese. 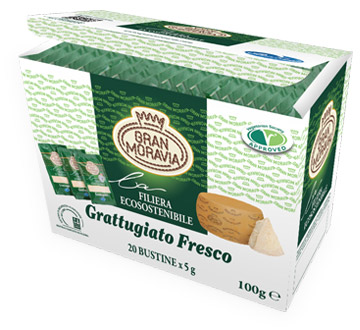 Gran Moravia brings two new products to Cologne: the Mini Gran Moravia, delicious and tasty sticks of this hard cheese produced by the Eco-sustainable Supply Chain in handy single portions, and the Freshly grated Gran Moravia in a box of 20 x 5 gram sachets, a unique product on the market, which retains all the flavour and characteristics of Gran Moravia whilst combining the practical and convenient aspects of the single portion size.

Brazzale S.p.A. has been operating in the milk industry since the end of the eighteenth century in Asiago, and is the oldest family business in the Italian dairy sector with at least eight generations of uninterrupted manufacturing. In 2002, the Brazzale family joined forces with the Zaupa family, who had been operating in the stretched-curd and pressed cheese sectors for generations. Continuous research to find the best combination of quality, convenience and safety of its products, has led the group to become the key player in this industry in Italy with four PDO products and six different brands: Alpilatte, Burro delle Alpi, Verena, Zogi, Gran Moravia and Silvopastoril. A co-founder of Assolatte in 1945, the company also took part in the foundation of the Consortium for the Protection of Grana Padano cheese in 1954, and is a member of the Consortium for the Protection of Asiago and Provolone. Brazzale S.p.A. closed 2012 with a turnover of approximately €165 million, approximately 30% of which in exports from Italy; it has over 500 employees and five manufacturing plants located in Italy, Brazil and the Czech Republic. Since 2003, in the city of Litovel in Moravia, it has been producing Gran Moravia cheese, aged and packaged in Zanè (Italy), as well as butter, fresh cheese and stretched-curd cheeses, all made using milk from the Brazzale eco-sustainable supply chain which, in 2011, obtained traceability certification according to UNI EN ISO 22005:2008 standards. It has developed a chain of retail stores under its own brand name in the Czech Republic and China. In 2012 Gran Moravia became the first cheese in the world to calculate its water footprint.