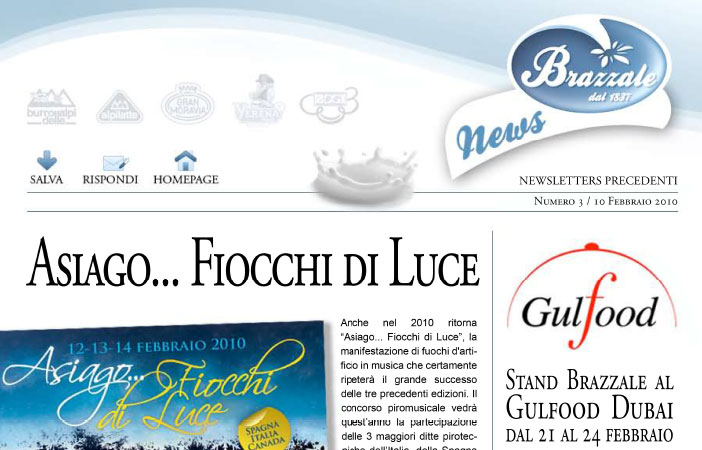 2010 sees the return of “Asiago …Fiocchi di Luce”; the event presents a firework display in music which will certainly repeat the enormous success of the previous three editions. This year’s musical fireworks competition will see the participation of the 3 major pyrotechnic companies from Italy, Spain and Canada and will include two shows at the “Romeo Sartori” Airport in Asiago (February 12-14) and one (February 13) in Bellocchio.
“Asiago … Fiocchi di Luce 2010” is organised by the Municipality of Asiago and Pro Loco Asiago – Sasso in collaboration with the Veneto Region and the Province of Vicenza.
Our group responded enthusiastically to the invitation from the Asiago City Council to be a partner in this event. We will be attending the event with a “Wooden Mountain Chalet” where we will exhibit and offer promotional tastings of our leading products.
The coincidence with the peak season for skiing holidays in this sunny mountain town, (“Italy’s smallest and brightest town” as D’Annunzio called it) ensures contact with a large audience from all around Italy.

BRAZZALE STAND AT GULFOOD DUBAI FROM FEBRUARY 21 TO 24.

From February 21 to 24, 2010, Gulfood is the most important event in the Middle East in the “food and hospitality” sector. Having reached its 15th edition, Gulfood is now recognised as a prestigious event on the calendar of trade fairs in this sector. Our company will be present with its own “stand” in Hall “R – K41”, “food and drink” sector. The event, which takes place in the most important hall in the exhibition area, gives companies the chance to contact and propose their products to customers in the Arab world. In the heart of DUBAI at the Dubai International Conference and Exhibition Centre, more than 45,000 buyers from the Middle and Far East in all sectors of the food and catering industry will attend to visit the over 3,300 exhibitors, 61% of which international and 39% local. The event will occupy a space of 71,300 square metres, 20% more than the previous edition. There will be 7 pavilions with over 75 areas dedicated to the various countries.

An unexpected and most appreciated accolade for our Factory Outlet in Zanè.
On 28 January 2010, the national newspaper “Il Foglio” defined the Asiago cheese “Vezzena” di Malga Dosso di Sotto – Cima Larici – Altopiano Asiago, sold at our factory outlet, as “the best Italian cheese.”
Here are some excerpts of the tasty article which appeared in the “BENGODI” section written by the literary critic and food and wine expert Camillo Langone: “I ate the best Italian cheese ever, and I almost don’t even know its name …
Brazzale is an honest cheese: he does not claim to be the one who makes the best Italian cheese. He merely sells it in the factory outlet, alongside his other cheeses.
To start with, he explains that the best Italian cheese is called Vèzzena, accent on the first E and the Z is pronounced like the Z in the word “mezzo”… The label says “Extra-aged Vèzzena”, so I ask Brazzale: “How old?” “Who knows. Maybe a couple of years.” The best Italian cheese seems to be even more than that, yet it is in great shape and not necessarily doomed to die in a cheese grater.
The consistency is hard, compact under the knife yet crumbly between the fingertips, and the beauty is it is crying. It drips. As soon as you cut it, its eyes fill with tears (dripping fat). And there’s a good reason why: it weeps for the fate of the Italian mountain animal husbandry, its wonderful but neglected cheeses, the herdsmen who are underpaid heroes, unknown soldiers for whom no one erects monuments but, quite the contrary, everyone puts a spoke in the wheels starting from the minions of Local Health Authorities that apply European regulations designed to stifle individuals and unleash industry.
This intense and amazing Vèzzena is a meditation cheese and this makes me meditate on Rendena cows: as they graze freely up there in the mountains, they eat the best flowers to give the herdsman the most fragrant milk, and I love them as if I were a Hindu, or Giosuè Carducci.”
The passion of our Group for huts and their cheese is so old that it is lost in the memory of our elders, who for centuries have thrown the paths of the Asiago plateau directly managing the pastures or trading butter and cheese produced in alpine pastures.

Gran Moravia has obtained the coveted Halal Certification from the Islamic Food Council of Europe, the only aged hard cheese. Halal certification guarantees that the “Gran Moravia” cheese meets the requirements of Islamic law, first and foremost of which is the absence of rennet of animal origin. Its packaging and traceability methods ensure that the Gran Moravia cheese can be considered as a daily ingredient in an Arab diet. The upcoming appointment at GULFOOD in Dubai will be an extraordinary showcase to publicise this certification which is of great impact to operators on the Arab and Far East markets.